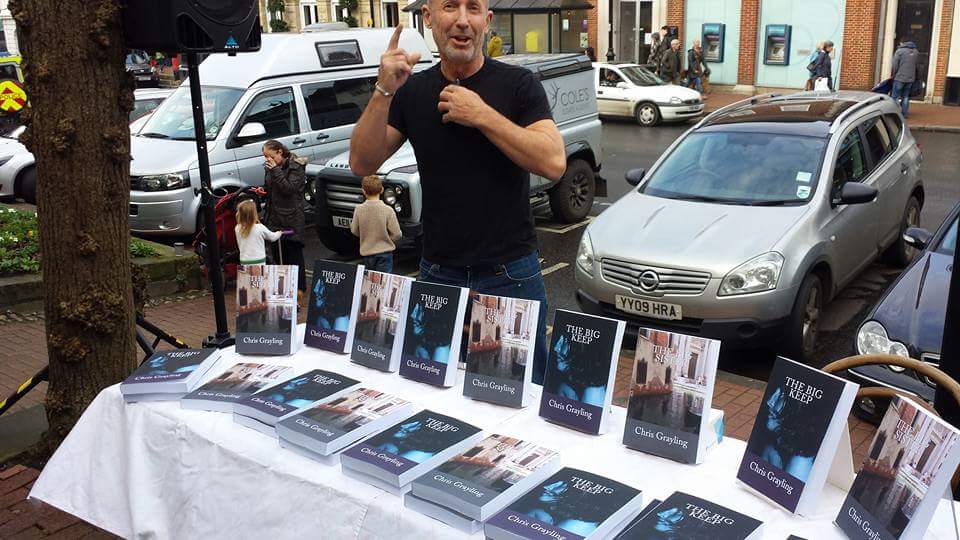 As for The Big Keep, here are some reviews of The Big Sister.

A fruitful and delightful read; Neil's gentility draws the reader back again and again. This is the Great British Bake-off of novels. Full of innuendos! Extremely recommended.

Dr Neil MacKenzie could become a cult figure amongst teachers who wannabe private dicks in the wisecracking mould of Raymond Chandler's Philip Marlowe. There plenty to guffaw about as Dr. Neil sets about rescuing his school from the clutches of incompetent and bullying management before returning to his new business of helping A-List damsels in distress, as their knight -in-shining-armour private detective. The plot crackles from Venice to Tunbridge Wells sustained by plenty of political incorrectness. The Marlowe-esque analogies -'The prospect of disco-dancing was about as inviting as a stag night in Tehran'- make you chuckle on every page.

It's not high art but you'll read it more quickly than a Jane Austen.

This is the second instalment from Chris Grayling in the story of Dr Neil McKenzie; maths teacher/detective and would be action hero. This second book is a better read then the first. The story rips along at a steady pace and is a real page turner in places. Some of the plot lines are well observed. I particularly enjoyed the plot involving McKenzie's head teacher and deputy head but it did resolve itself a little too easily. The main plot involving a Hollywood actress is a little contrived at times but it still managed to keep me interested. I hope this is not the end of the adventures of Neil McKenzie and Chris Grayling can conjure up more intriguing capers for him to engage in. It is certainly more entertaining then some of the detective stories which end getting made into TV series. Overall, a thoroughly enjoyable read.

An accomplished sequel set in the complex world of education and badminton offers up memorable characters and pitch-perfect observation. Chris Grayling (not the Tory MP) never fails to entertain you in his new laugh-out-loud sequel to `The Big Keep'. Grayling ignites the fire of the reader's heart by firing endless action and fast pace dialogue across the pages. Place `The Big Sister' next to the word boring and you have an oxymoron. Neil Mackenzie does his best to make the world anew when everything around him - Kent, family, school, colleagues, sex, sustenance - conspires to pull him back to his dark past.

This is a book about magic, but there's plenty of reality. You might find the magic funny - visit Diagon Alley to purchase all your Hogwart's kit - oh wait, wrong book. 'The Big Sister' engages the reader: settling into a new job, making friends, learning the ropes of life on the greasy pole to success, when to obey school rules and when to blur the lines are great life lessons taught through the magical tongue of wit from Chris. Grayling does everything a great writer should: he offers up characters who stay with the reader long after the end of the book, giving an almost filmic vision of places and people, and revealing a world that most people will never even think about.

Read this impressive sequel and I assure you won't be disappointed. A very delightful read - thoroughly recommended!

An enjoyable and entertaining read

This is a very enjoyable and entertaining read punctuated with humour and lots of joie de vivre. It is a fast-moving tale that all teachers will relate to and all non-teaching readers will find intriguing. The author is clearly a teacher as his insight and observations of the teaching profession are spot on. This is the second adventure of Neil Mackenzie and his hilarious sidekicks Rocky and Gere. And this time the trio are out again to put the world to rights and save the damsel in distress. I would thoroughly recommend that you read the author’s debut novel, The Big Keep, before turning to this equally diverting second novel, The Big Sister. Now that I am at the end of both novels, I hope that I haven’t now finished the last adventure of Neil Mackenzie maths teacher cum Private Dick, but the author will treat us to a trilogy in the near future. Maths and badminton has never been so cool.

A compelling and witty read

I've been waiting eagerly for the sequel to 'The Big Keep' and it didn't disappoint. Chris Grayling's witty style of writing compels you to keep reading. Humorous and light-hearted - highly recommend as an easy and engaging read!

A real page-turner - good light entertaining reading to while away the hours. The author has developed his writing style since the Big Keep, particularly with the characterisation and scene setting, and in particular I found myself really transported to Venice in the opening scenes. The ending was quite predictable but nonetheless convincing and enjoyable, with the engaging characters, interesting multiple plot lines and witty dialogue throughout making it very hard to put the book down. Rocky remains my particular favourite!

A perfect book for a Winter's day

I'm only half way through, but it's been a page turner from the beginning. A great sequel from Grayling. Proving to us again, his obvious ability to tell a great tale.

Definitely up a gear" from "The Big Keep"

I read "The Big Keep" in four days; I read this in a day and a half. Much more of a page-turner, much more riveting. This could in part be because I had the gist of how the plot was likely to develop based on the first one, but for my money I think the characters here are much more developed. I'd like to think that "the best is yet to come" (I have already enthusiastically downloaded "The Big Finish"). The prose is more "banter" than high literature, as has been said before, but then it doesn't pretend to emulate Dickens or Wilkie Collins. Disgruntled teachers - of Tunbridge Wells or anywhere - will find the "school thread" particularly enjoyable, and personally I preferred the "teacher element" in this second book to the first (wherein I found Mackenzie's 'teacher persona' just a little too seedy to be credible). All in all well worth the time.

The second if what I understand to be a 3 part series, I am really enjoying these books and the main characters. Nice easy read, story moves in at a good pace with plenty of humour thrown in. Can't wait to read the next one.

Thoroughly enjoyable easy-going read. Looking forward to rounding the trilogy off with the final instalment in the Big Finish.

A good read By Tess Thornton

Enjoyed book, an entertaining romp. Liked the easy read, found some of the language a bit macho but overall great

I do like this author, he sets the scene beautifully before accelerating into the main plot without too many deliberately misleading detours. HIs characters are never unrealistically glamorous, and the protagonist is an intriguing balance between failed Lothario, academic under-achiever, and suppressed martial artist with a great sense of humour. I love Grayling's innovative similes.

Second in the series and as much fun as the first. A romping adventure, well written and with entertainingly plausible characters. What more could anyone want in a holiday read?

Neil Mackenzie is back in his second outing, this time saving lonely, vulnerable, world famous A-list Hollywood actresses from muggings while on a school art trip to Venice! A thoroughly enjoyable book for anyone who has ever hated their boss and loves to read of one getting their comeuppance! Lots of fun.

A fruitful and delightful read; Neil's gentility draws the reader back again and again. This is the Great British Bake-off of novels - full of innuendos! Extremely recommended. Chris Grayling does everything a great writer should: he offers up characters who stay with the reader long after the end of the book, giving an almost filmic vision of places and people, and revealing a world that most people will never even think about. Read this impressive sequel and I assure you won't be disappointed. A very delightful read - thoroughly recommended!